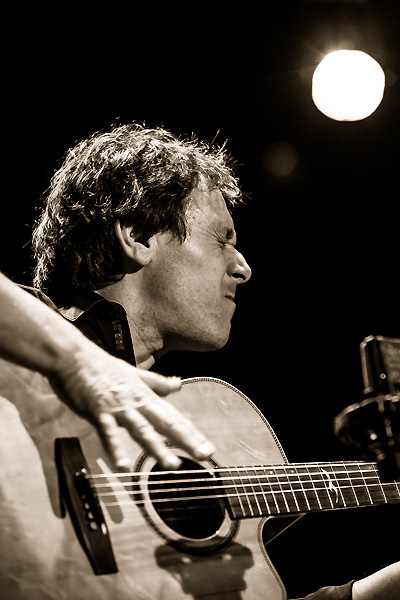 Peppino D’Agostino emerged on the acoustic guitar scene in the early 80’s as a leading member of the second wave of the great fingerstylists that helped redefine the instrument in the ’90s. His remarkable technique, penchant for open tunings, and percussive effects are the basis of his unique compositional style. Add to that his natural warmth, playfulness, and broad musical tastes and you
have the recipe for what he calls “minestrone music”.

Recognized as “the guitarist’s guitarist” by Acoustic Guitar magazine and described as “a giant of the acoustic guitar” by the San Diego Reader, D’Agostino, who has performed in more than 30 countries and shared the stage with Tommy Emmanuel, Sergio Assad, Larry Carlton and Eric Johnson amongst
others, was voted Best Acoustic Guitarist by readers of Guitar Player magazine in 2007 and continues to evolve and grow in ways that would have been hard to predict when he first showcased his melodic yet emotionally intense style on the recording of “Every Step of the Way” which was named one of the top three acoustic guitar albums of all time by Acoustic Guitar magazine readers in
2008.

An active member of the Pacific Guitar Ensemble and a music educator, Peppino likes to compare his musical approach to the culinary art of his native Italy: “If you want to prepare a good, succulent dish you have to know how to mix the various ingredients and, most important, have knowledge of the right amounts. Similarly, in musical composition you must be able to properly combine melody,
harmony, rhythm and percussive effects with discretion and elegance.”