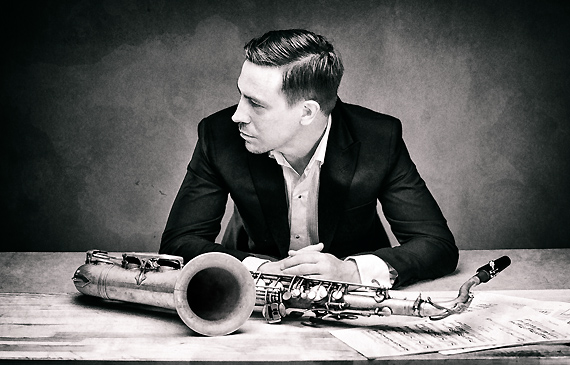 Norwegian born, Kornstad, studied saxophone at the Trondheim Jazz Conservatory where he emerged with a distinct musical voice. After years of strengthening his technique, discovering nuances, and exploring the sonic possibilities of the saxophone being part of groups and in collaborations, Kornstad released his own solo album Single Engine (2007).

2009 was a major moment in Kornstad’s artistic evolution. On a visit to New York, he discovered the world of opera and decided to take lessons which led to him being admitted into the Operahøgskolen (The Academy of Opera) at the Kunsthøgskolen I Oslo (Oslo National Academy of the Arts), where he completed his master studies as operatic tenor and he made his debut at the Oslo Opera House with the character tenor role Il Podestà in Mozart’s La Finta Giardiniera.
Whilst still in his first year of opera school, Haakon released his third solo saxophone album, ”Symphonies in My Head” which showed early signs of how his new knowledge of opera would be integrated into his jazz expression which was the beginning of Kornstad’s music moving in a new direction, a meeting of jazz and opera in where he sings tenor and plays the tenor saxophone

“To anyone with even the slightest interest in jazz and opera, Kornstad is a musician who simply must be heard, for there is no one else like him!”
William Brown, The Journal (Newcastle)