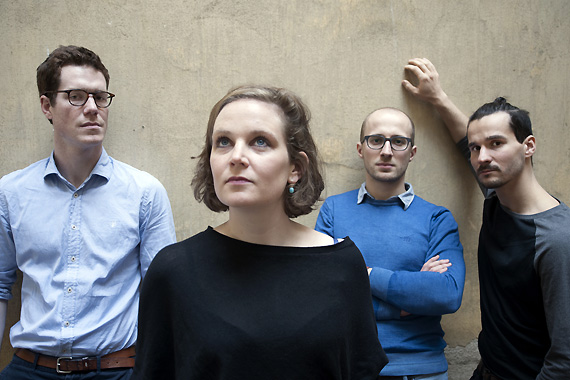 Drummer Eva Klesse has been hailed as a “shooting star of the European Jazz scene”. In 2014, Eva met Evgeny Ring (saxophone), Philip Frischkorn (piano) and Robert Lucaciu (double bass) in Leipzig where they played a handful of concerts together. In a short span of time, the band displayed a remarkable diversity of musical styles and a strong creative drive, and, six months later, they recorded their debut album “Xenon”, which, one reviewer described as “the dream debut of a dream band” and they were awarded the Jazz Echo (German Music Award) in the “Newcomer of the year“ category and this followed with the group playing a number of festivals and concerts across Germany and a tour in Chile.

On their second album “Obenland”, the characteristic sound of the Eva Klesse quartet was now permanently present. All compositions were penned specifically for this album and were custom-tailored to the four personalities, creating a stronger coherence and simultaneously opening new possibilities for exploring new directions. The aesthetics swayed between detailed chamber jazz and
energetic peaks.

During dynamic interplay and mounting free passages, Klesse and her musical partners allow their emotions exactly the right amount of space, in that improvisation conveys intensity instead of egocentric ecstasy. A balance of such subtlety that reflects the band’s maturity.