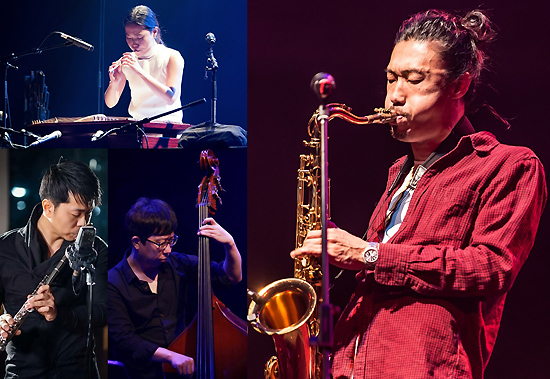 “His appearance is an achievement of development of Korean jazz which no one had predicted, and his album will be a classic of Korean jazz.” Duk Ho Hwang, Music Critic

Saxophonist Kim Oki is the shorter version of the name, Okinawa Kim, a nickname which YoungHoon Kim gave himself as he loves the view and the people of Okinawa in Japan who believe in freedom and peace. In his younger days, Kim was a b boy and also a back-up dancer for some famous Korean Artists like Sech Kies, Ku Bon Seung, etc. and was into rock and hip hop music.

In 2009, Kim Oki started to play saxophone in some small clubs and was a member of the improvisation project, SMFM, led by percussionist Jae Chun Park. It was there that Oki met bass player Sung Bae Kim and they founded an independent label called ILIL Sound.

In June 2009, ILIL Sound published Kim Oki’s first album – “Cherubim’s Wrath” which was based on the novel “The Ball Shot By A Midget” written by Joe Sae Hee. The album received the Best Jazz and Crossover performance of Korean Music Award in the same year.

Kim Oki’s style of music has been describe as “unpredictable avant garde” music which he uses to tell interpret stories close to his heart. His second album “Tumultuous Time Travel” is about historical events in Korea that are forced to be erased but shouldn’t be erased.

Beside Kim Oki on saxophone, the other members of the band are Wonsool Lee (bass), Ji Ha Park (piri, taepeongso, voice) and Gyujae Lee (flute)